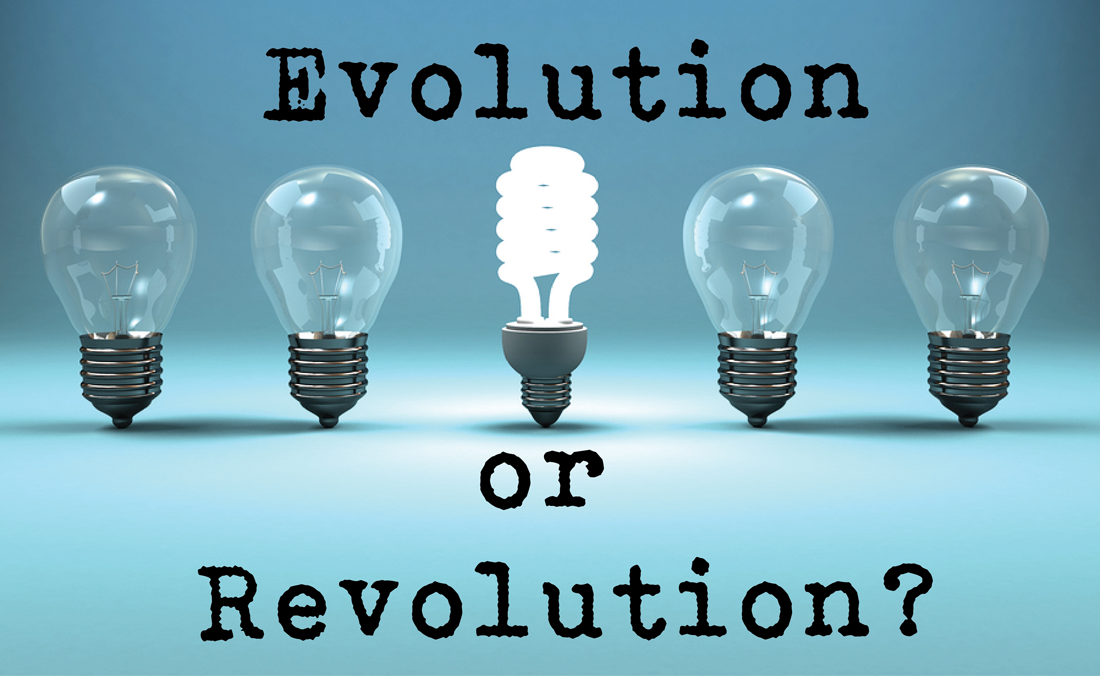 This post discusses rates of speciation (the notions of gradualism versus punctuated equilibrium as used) in evolutionary biology and the extent to which change in products can be described as (dis)continuous. Is product innovation a matter of evolution or revolution?

One of the perennial controversies in evolutionary biology is the question of whether evolutionary change manifests itself as a continuous flow, or in a more discontinuous fashion.

An advocate of the first perspective is Richard Dawkins, an evolutionary biologist who regards evolutionary change in species mainly as an activity that is captured in genes. As genes change (mutate) at a more or less continuous speed, this results in a continuous flow of (genetic) change in species. This does not mean that the visual appearance of species also changes with the same continuous flow. It specifically addresses the changes captured in genes, which are invisible to the naked eye. For a few decades now it has been possible to measure these genetic changes. Compared to the period of time we have been familiar with fossils this is, therefore, a recent development.

The apostle of the second perspective is Stephen Jay Gould who, together with Niles Eldredge, coined the term punctuated equilibrium which basically means ‘most of the time little or nothing happens, then sudden change disrupts the steadiness’. Gould and Eldredge were palaeontologists, in other words people who study life from the geologic past based on fossils. Deceased organisms are preserved as fossils only in very rare cases, and less than 1% of all organisms that ever lived is estimated to be known from fossil records. Besides that many changes in species are not visible in fossils (e.g., soft tissue, behaviour, colour, etc.). Consequently, numerous changes that a species has undergone are not represented in the fossil record. The debate on the extent to which change in species over time is best described in terms of punctuated equilibriums is thus influenced to a considerable extent by the (lack of) quality of fossil records.

This blog is not the place to solve the controversy between continuous evolutionary change and punctuated equilibriums. The preceding text merely serves as an illustration of the different perspectives on evolutionary change in species. Anyone who would like to find out more about the differences in perspective between Gould and Dawkins will find the book entitled ‘Dawkins vs. Gould: survival of the fittest’ an interesting read.

The discovery of a carrier of information in biology, the gene, has had an enormous effect on how we view biological evolution today. For technology or the man-made-world, we do not yet have a similar undisputed carrier of information. The meme was proposed to fill this gap by Richard Dawkins in his book The Selfish Gene that was published in 1976. In the 1990s memetics became a popular field of study for exploring the meme as an element of the Darwinian evolution of information. However, it was not embraced by the scientific community. According to Bruce Edmonds the scientific study of the meme has not provided the similar ‘explanatory leverage’ that the gene did. That is why Edmonds declared memetics a dead end street in 2005. Without judging whether memetics has been rightly set aside, I note that, to date, it has not contributed to innovation studies. I therefore regard it as no more than a philosophical concept.

It has been recognised that both technologies and products are replaced once superior alternatives emerge. The steam engine that was replaced by the electric engine is a prime example of this. In this technological transition the use of steam is discontinued and replaced by electricity. This is, therefore, a case of discontinuity, although the transition took many decades to complete. As the incumbent technology was eventually replaced this could also be labelled as a revolution although that word is not used in that context. More commonly used are the notions technical discontinuities and dominant designs that are used in technology management literature to describe the cycles of change technologies go through. Examples of how these changes occur both top down as well as bottom up are described in Chapter 2 of ‘On the Origin of Products’.

An example of a recent discontinuity is the arrival of the smartphone that replaced the GSM (or feature phone) and the PDA. Although it seems as if the smartphone suddenly appeared in 2007 when the first iPhone was launched, a closer look reveals that it was not suddenly conceived but resulted from a series of developments over a period of decades. How this happened is discussed in my post ‘On the Origin of the Smartphone’.

What becomes clear from the case of the smartphone is that the speed of evolution in products is indeed not continuous when observed from ‘fossil records’. Different periods can be identified in the development history. Technical discontinuities mark the beginning of a trial-and-error approach to technology and design variants. This was a period of considerable variation, ending with dominant designs and the further elaboration of those designs.

These dominant designs are therefore the outcome of an evolutionary process of variation, selection and retention. Unfortunately inventors, designers and the like are unable to get full control of this process of evolution. ‘Dominant designs emerge as an outcome of institutional dynamics constrained by economic and technical conditions. Dominant designs can only be known in retrospect and they evolve over time.’ (Tushman and Murmann, 1998, p.231).

In the realm of biology there are different perspectives on how ‘continuous’ the rate of evolution in species is. Without asserting that one perspective is correct and the other is wrong, it is clear why and how they differ. The perspective taken determines, to a large extent, how the change in species is described.

In the realm of technology we do not yet have a means to measure ‘the source code’ of stuff produced by humans. Instead, the descriptive models based on characteristics are used to describe innovation and these models appear to show that product innovation is characterised by alternating periods of direction finding and periods of design elaboration. In the world of made the observer’s perspective also has a major influence on the perception of the level of change. Nevertheless, products will continue to change, no matter whether we define this change as evolution or revolution.

1 thought on “Rates of Speciation”